Showing posts from October, 2013
Show all

Another fatal crash, another visitor detained 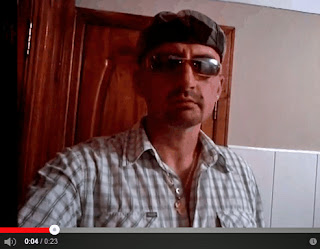 Screen capture of Damian Buksa  on YouTube: Long stay in Cuba.      AGAIN CUBA   is preventing a Canadian tourist from leaving after a serious car accident. Like Cody LeCompte ,  Eli Raffoul and others before them, Damian Buksa has been ordered to remain on the Caribbean island until authorities determine whether charges should be laid.    Buksa, 34, of Mississauga, has been in Cuba since July, when he arrived for what he thought would be a two-week holiday. His story became public only this week, however, as friends and relatives stepped up calls on the Canadian government to pressure Cuba for Buksa's release.    Cuban investigations are slow, even in cases that might seem straightforward. Here, however, the circumstances are far from clear.    Buksa, visiting the Guardalavaca area, rented a car and engaged a Cuban man to act as his guide. He says he was asleep in the back seat and the guide was driving when the car left the road and rammed into a tree.    The men h
Post a Comment
Read more

More from the lost Chevy commercial 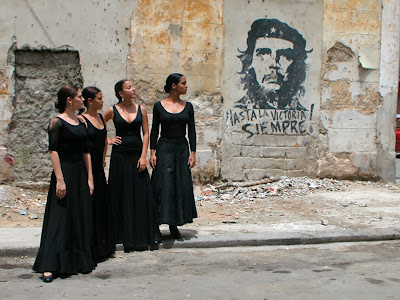 From the archives of Tony Robertson: Flamenco flock: Under Che's solemn gaze, a group of Bailarinas watch for their ride. Upright: Bassist stands tall by a '51 Chevrolet. High on the hood: '57 Chev provides perch for an owner-turned-actor. Next: Camera platforms. See also: End of the Day Treat It Like Gold The Daily Dance Discovered! The Lost Chevy Commercial
Post a Comment
Read more 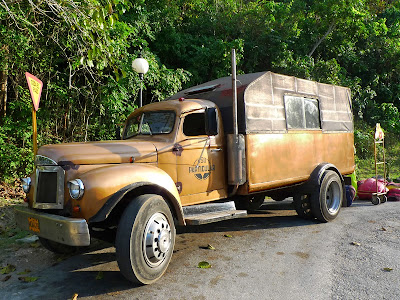 Built only in 1948, the International KB-5 was offered in several wheelbases.    International trucks lack the following of old Fords, Chevrolets and Dodges. International was primarily a manufacturer of commercial trucks – even if it did produce some fine pickups over the years – and thus couldn't build the close bonds with generations of owners that have created such loyalty to the other brands.    International survives today as Navistar, which builds only heavy trucks.    But there's one place where International gets some love. Original colour choices: green, red, maroon, black.    In Cuba, many Internationals that started life as commercial trucks – medium-duty K and KB models from the 1940s and L, R and S series Internationals from the 1950s – live on today in the hands of individual owners. They serve as private taxis and buses and farm vehicles, and often double as personal transportation.    And whether they have their original Green Diamond six-cylinder
Post a Comment
Read more

A Plymouth, a Chev and a mystery truck 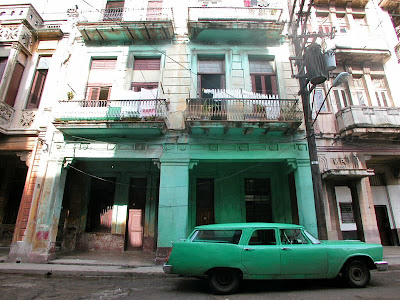 THREE MORE images from Tony Robertson, First two are reasonably easy to identify, but the third one has me stumped. Any guesses? Even sans chrome, Plymouth wagon is recognizable as a '57 Belvedere Sport Suburban.  Chevy Town Sedan with jazzy paint scheme is a '37 or '38. Looks like a GMC or a Dodge, but it's something else.
2 comments
Read more

Further to that last item 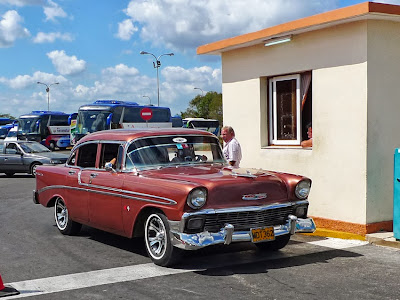 Chevrolet produced nearly 270,000 Bel Air sedans for 1956.    At VanDerBrink Auctions , you can see all the Chevys (plus a scattering of other brands) that were sold in the Lambrecht Chevrolet sale – and marvel at the prices some fetched. Still, looking at the condition of many of the Lambrecht cars, I'd have to say the Chevrolets in Cuba are often in better shape. A Chevrolet Suburban taxi in Havana. Suburban is a '52 or '53. Few cars wear two-tone paint better than a 1955 Chevrolet. Dash wiring could use a little work. Another '55 sedan, this one a taxi. Chevrolet Styleline sedan from 1950. Rear fender on this 1951 Chevrolet Styleline De Luxe  appears to have been reshaped at some point over the years .
Post a Comment
Read more 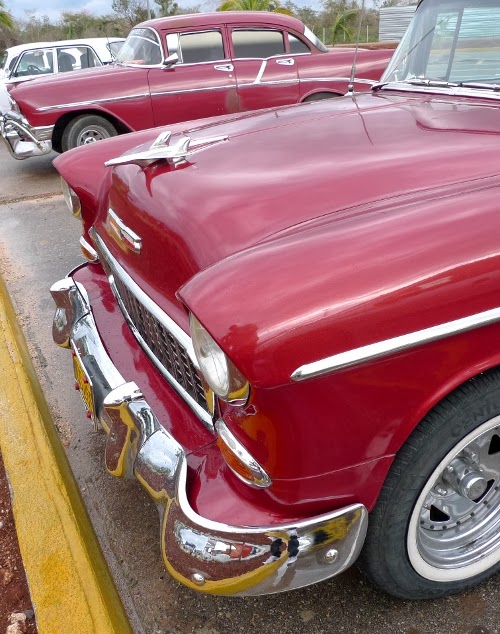 A '55, foreground, and a '56: Classic Chevrolets abound in Cuba.     OLD CHEVROLETS have been much in the news lately (though always in our hearts) because of a Nebraska auction that drew world-wide attention.    Roy Lambrecht, a small-town Chevy dealer for 50 years, had the unusual habit of hanging on to unsold vehicles rather than cutting prices to make room for new inventory. Over the years he amassed some 500 cars and trucks – some with single-digit readings on their odometers and the factory plastic wrap still covering their seats.    Most were the worse for time and weather, if not wear, but when the Lambrecht family finally decided to sell the collection, the two-day auction attracted 15,000 would-be buyers from around the globe. Of course, we know another place to see old Chevs. These ones might show the marks of many miles, but that doesn't mean we love them less. Nicely chromed '51 Chev sports add-on bumper guards. This 1957 Townsman wagon is
Post a Comment
Read more
More posts