Showing posts from September, 2011
Show all

The young and the reckless 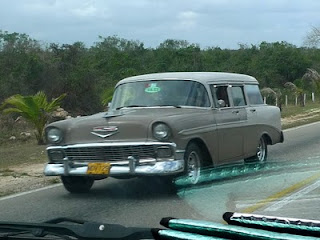 Trim taxi: 1956 Chevrolet Bel Air Beauville.         T HE GOING rate for a rutero trip is 10 Cuban pesos, reports Here is Havana blogger Conner Gorry . That's the equivalent of 39 Canadian cents.     This, of course, is the fare for locals (of which Gorry, American birth notwithstanding, is most decidedly one). Hop in as an obvious visitor, and you should expect to be asked for at least one convertible peso ($1.03 Cdn.)     Gorry, however, warns that a change in regulations has made riding in a fixed-route collective much riskier. Where once only the owner was permitted to operate a car as a taxi, reforms aimed at encouraging more free enterprise now allow that owner to hire others to take shifts behind the wheel.     As a consequence, "drivers are now young, restless and reckless," says Gorry. "It's plain some of them have never even driven before."    Yeah, but hey  —  39 cents? See also: Havana's fixed-route taxis.
3 comments
Read more Nothing like a hard drive crash to bring home the importance of backing up irreplaceable photos. I have an external drive, but for some reason  —  OK,  laziness  —  I hadn't copied anything to it for 12 months.    So when my main drive gave up last week, I thought I'd lost a year's worth of material  —  including nearly 800 Cuba images. I was bummed.    Fortunately, after a series of manoeuvres that would make a Cuban mechanic proud  —  yes, including the freezer trick  —  I was able to bring the drive back to life. Photos and less important stuff, like tax returns, are safely backed up.    And I'm even using that same drive as I write this, though I realize it's living on b
2 comments
Read more A Geely CK police car in Havana.      THAT FIGURE of 60,000 old American cars in Cuba has again come under question, but this time from a more credible direction. In a recent report from the island, Detroit Free Press travel writer Ellen Creager suggests the number might actually fall between 20,000 and 50,000.     Creager cites only "auto watchers" as her authority on this. Elsewhere in her readable and even-handed article, however, she relies on Rick Shnitzler of the Taillight Diplomacy group and John McElroy of Autoline Detroit , a weekly television show, for insight into Cuba's automotive scene.    And for the real nuts and bolts she speaks to Cuban car owners like Obel Aguado of Vinales, who employs a two-litre bottle as makeshift gas tank for his restoration-in-progress 1955 Dodge. You can see a photo of it in a 47-image slide show that accompanies the article.    Creager, of course, wouldn't be a Detroiter if she didn't comment on the lost opport
Post a Comment
Read more
More posts