Showing posts from February, 2016
Show all

Video: The last cars out of Cuba

February 07, 2016
SEVERAL U.S. companies hope to restore ferry service between Florida and Cuba, though none have announced even a tentative starting date. Meantime, a series of posts published here on the suspension of the auto and passenger ferry service between Havana and Key West in 1960 continues to be one of this site's most popular topics.     CARISTAS friend Casey Strong draws our attention to a video on The Guardian's website that shows cars being loaded in Havana and other scenes from the last voyage in 1960.    Did you see  the 1959 Chevrolet convertible ? The Ford from New Jersey? Or  the Studebaker Lark wearing Illinois "Land of Lincoln" plates ? The earlier posts: The last cars out of Cuba That ship has sailed Two more owners, one more name
Post a Comment
Read more 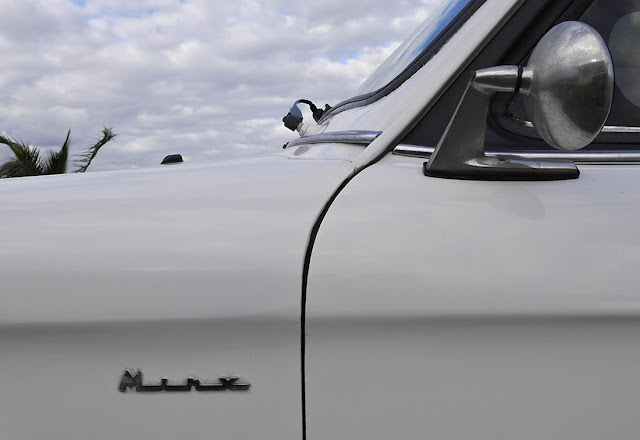 A minx, it seems, is no relation to a mink. But did Hillman know that?    I ALWAYS thought that Hillman innocently named its Minx after an animal, unaware that the word would prompt snickers in certain circles – including, I must confess, mine.    And in Mike Myers' circles too, it seems. "I bet she shags like a minx," his character exclaims in the 1997 movie Austin Powers: International Man of Mystery .    But none other than the Oxford English Dictionary defines minx as "an impudent, cunning or boldly flirtatious girl or young woman" – and traces its origin to the mid-16th century.    The M-word appears never to have been an alternate form of mink, the weasel-like critter so favoured by furriers. (For an unsettling photo of a mink eating a crayfish, see the Wikipedia entry .) Raymond Loewy and Associates contributed to the Minx's stately styling.    Surely then, Hillman would have known in 1932, when it introduced its first Minx, that th
Post a Comment
Read more
More posts