Showing posts from April, 2009
Show all

Where Pontiacs fade, but never die 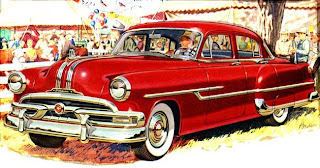 The Pontiac brand, the rumours say, is about to be axed as part of the survival plan for not-so-General Motors. For those of us who remember the Wide-Track models of the 1960s, the Canadian-market Beaumonts and Parisiennes and so many other fine Pontiacs, this is a sad moment.     Yet we can take comfort in knowing there’s a place where ’48 Torpedo Deluxes and ’54 Star Chiefs and ’58 Chieftains will roll on, just like the De Sotos, Edsels and yes, Oldsmobiles that became orphans of commerce. In Cuba, Pontiacs will live forever. (image from plan59.com )
Post a Comment
Read more 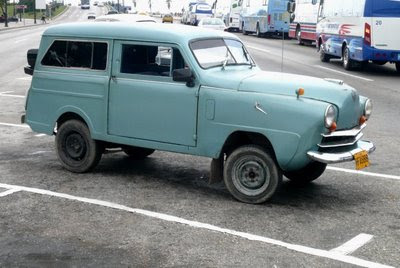 Put a very tall fellow on a rather small scooter and you know you’re in for an entertaining road trip. Steve “YYZ” (apparently he’s the namesake for Toronto’s Pearson Airport) is a frequent visitor to Cuba and, evidently, fearless. Steve, all six-foot-and-a-bunch of him, recently folded himself onto a Chinese-made rental scooter and set out on repeated excursions from Havana, dodging potholes and traffic cops. He doesn’t quite dodge bullets, though once, riding alongside a military live-fire exercise, he can “clearly hear the zzzzzzzzip in the air as rounds pass down the range.” Steve’s rich description of his travels can be found on the 7 daysinparadise.com website . The writing style is easygoing, sometimes – LOL!! – too easygoing, but Steve’s self-deprecating humour and keen eye for detail will keep you smiling and reading. Ride along as he scours Havana for the ingredients for a dinner for some Cuban friends. Walk along as he finds himself pushing his stalled moto up the same hi
Post a Comment
Read more 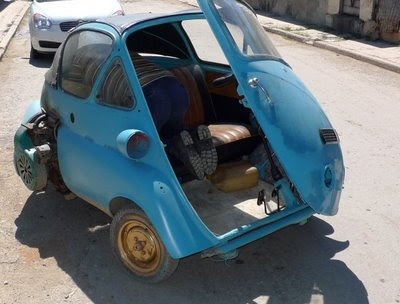 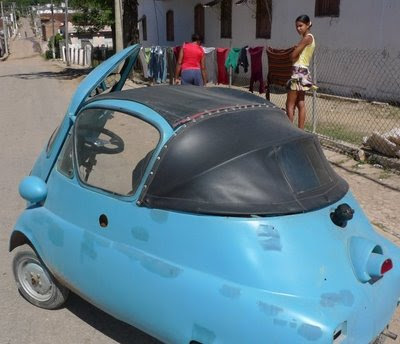 I thought the “bubble” side windows identified this as an early-series 250, but Bruce Fullerton’s cheerful Isetta Tech website tells me all BMW Isetta export models had the larger 300-cc motorcycle engine. And while every Isetta Moto Coupe had a fabric sunroof (doubling as emergency exit if the front door was damaged in an accident), this one’s folding rear top was a feature of the less common Cabriolet Tropical model. The Isetta looks like a marriage of a refrigerator and a scooter, which, by no coincidence, were the major products of its developer, Italy’s Iso, in the early 1950s. Several firms would build Isettas under licence but Germany’s BMW was by the far the largest producer, selling more than 100,000 in its domestic market alone as people strove to get mobile in the years after the Second World War. (Check out a great selection of mini-machines from that period and others at the Bruce Weiner Microcar Museum in Madison, Georgia, United States, not far from Atlanta.) Maynar
Post a Comment
Read more

April 12, 2009
I've seen photos of a few BMW Isettas in Cuba (or maybe a few photos of the same Isetta in Havana), but I came across this one elsewhere on the island. Its owner, who we will call Maynardo, bought it three years ago and is gradually restoring it.    I asked Maynardo if I could have a ride in the Isetta  —  a lifelong dream, ranking just below an Amphicar  —  and he graciously agreed. Maynardo blew into the gas tank to build up fuel pressure and opened the huge front door so we could settle on the church-bench like seat. With the huge front window before us, I didn't feel at all cramped. It's a lot like a Smart car  —  surprisingly spacious, at least for two occupants.    My driver pulled two wires from the tangle below the instrument pod, touched their ends together and the Dynastart (starter-generator) spun the single-cylinder BMW thumper into life. With no cover over the 250-cc engine, motorcycle sounds filled the cabin and echoed from the concrete walls of bu
2 comments
Read more

And sometimes, their money's no good there 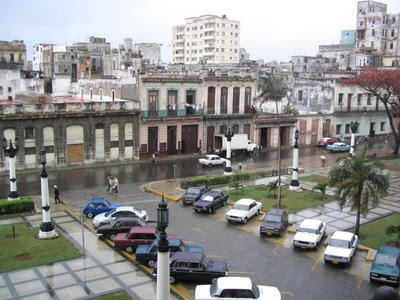 The Castro government wasted little time in abolishing private ownership of vehicles. Pre-1960 cars and trucks remained the property of their owners (and, with the proper permit, could be sold to other Cubans). But the Soviet vehicles that replaced the American imports were the property of the state, to be handed out to individuals based on their demonstrations of revolutionary zeal. “An outstanding worker, with thousands of volunteer hours or a mission as a soldier to Angola or Ethiopia, might consider himself lucky if he was allowed to acquire a Moskovich or a Lada,” writes Yoani Sanchez in her famous Generation Y blog. “Professionals of the highest rank would compete in the universities and study centers for the small allocations of automobiles.” Many of those cars remain in service for their recipients and their descendants, still “non-transferable and easily confiscated.” Cubans can buy the Peugeots and Daihatsus that are the imports of the post-Soviet era – if they have s
2 comments
Read more

Your money’s no good here 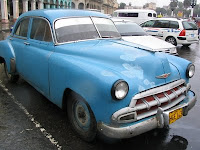 American car buffs anticipating the pending (perhaps) cancellation of U.S.-Cuba travel restrictions are probably already dreaming of bringing home a ’57 Chevy Bel Air. Maybe with its trunk stuffed with cigars.    Barring, however, any complete political change in their southern neighbour, they’ll learn what Canadian and European car collectors already know.You can look, but you can’t buy.    Sales of pre-Revolution cars and trucks are allowed, but only between Cuban citizens.    The Yanks will note too that most of Cuba’s much travelled cacherros – even the ones that haven’t been fitted with Mitsubishi diesel engines and Peugeot disc brakes – have been patched up and warmed over far too many times to hold much value in the American market. You want a ’54 Monterey sedan? You can probably already find a good example for reasonable money without leaving your area code.    Old cars were briefly offered to outside buyers, during the “special period” after the collapse of Soviet aid
Post a Comment
Read more
More posts