Showing posts from July, 2010
Show all

Cody, Danette in Cuba     YESTERDAY , Danette LeCompte said in a Facebook posting that she had been told by Diane Finley, Canada's citizenship minister as well as LeCompte's local Member of Parliament, that "our dealing with the press is hurting our position." LeCompte's response to this statement? "We believe that had the press not been involved, nothing would have happened."   Hard to argue. After weeks of Canadian government inaction while LeCompte's 19-year-old son, Cody, was detained in Cuba, recent media attention spurred another cabinet minister, Peter Kent, to call in Cuban officials to "express concern" about the lengthy investigation into an April car accident in which Cody was involved.    That was yesterday. According to reports today , the LeComptes were called to a meeting at a Cuban police station at which they were told Cody will be able to leave as early as next week. The family posted bail of about $2,200 Cdn. and
3 comments
Read more

Cody Lecompte   A story today in the Toronto Sun suggests Cody LeCompte is being held in Cuba because of a "a “bizarre” law requiring a driver to prove innocence after any traffic accident that causes death or injury. "You’re guilty until proven innocent,” Cody's mother, Danette LeCompte, told the newspaper.   While it certainly might seem this way to the LeComptes, the reality is that Cuba, like many nations, considers an accused person innocent until proven otherwise. "The burden of proof lies with the prosecution," according to a primer on Cuban law published by the country's ministry of external relations.    Even foes of the Communist government admit that the presumption of innocence, a principle that dates to ancient Rome, applies in Cuba. The Florida-based Cuba Free Press Project cites Article 3 of Cuba's Rules of Criminal Procedures, which reads: "Every defendant is presumed innocent until sentenced."     The authors, howev
Post a Comment
Read more

Buick, inside and out 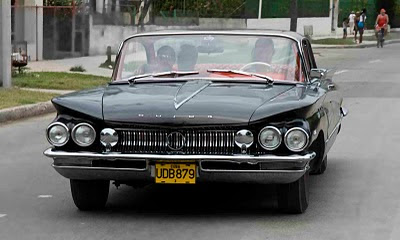 Here's further proof that not every old car in Cuba is powered by an engine from a Lada or a Volga. This 1960 Buick Le Sabre (like the Buick in the CARISTAS logo, but in better shape) was photographed by Michael Roy. Inside the nicely detailed engine compartment can be seen a 364-cubic-inch Buick "Nailhead" V-8. OK, maybe the carburetor isn't original, but that doesn't take away from the authenticity of this 50-year-old daily driver .
Post a Comment
Read more

July 07, 2010
Couple of interesting developments in the LeCompte case. First, despite earlier reports, it appears no decision has been made on whether the 19-year-old will face a criminal trial for the April traffic accident in which one of his passengers was seriously injured. According to the Canadian Press, the Simcoe, Ont., teen was told by his Cuban lawyer that a hearing to determine whether he "faces any charges" will not take place for at least another month.    My guess is he already faces charges, and the court proceeding will be some type of preliminary inquiry to establish whether enough evidence exists to warrant a trial. The Cuban justice system, though modified with Marxist-Leninist legal theory and mysterious to outsiders (and certain Cubans as well), is rooted in Spanish and American law, suggesting such an approach would be followed.    The hearing might also be the moment when LeCompte is allowed to plead guilty, pay a fine and leave Cuba, perhaps in time for the st
1 comment
Read more
More posts