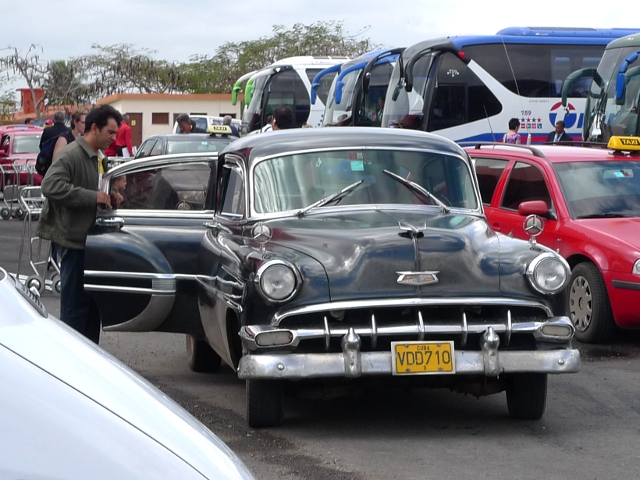 Heading to Florida for some automotive fact-finding, and won't be able to post for a few days. If I need to grab a cab at the Tampa airport, I bet it looks nothing like this. Juan Gualberto Gómez Airport : 1954 Chevrolet.
1 comment
Read more 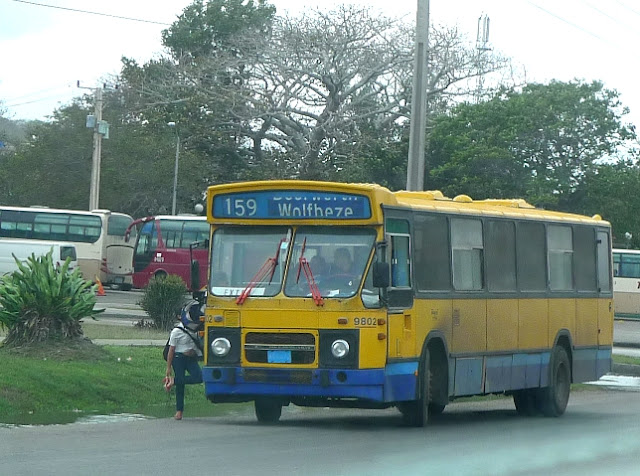 Circa-1980 DAF bus, built in the Netherlands.       If this truly is a zero-sum universe, does that mean some old Cuban bus with a "HABANA DEL ESTE" destination board is just now leaving Eindhoven? See also The Busman's Paradise
Post a Comment
Read more 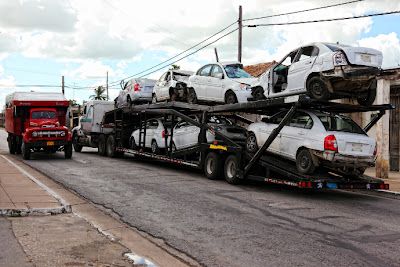 Copyright Robin Thom. Used by permission.       Prolific photographer Robin Thom took this shot in Cascorro, a small town on the Carretera Central in the eastern part of the island. White Hyundai Accents, as far as I've seen, are used exclusively in Cuba as rental cars, and are usually driven by foreign visitors.     Cascorro, by the way, is just west of Camegüey, the city that was Cody LeCompte's destination when his rental Accent was struck broadside by a dump truck, injuring the Canadian teenager and three passengers and triggering LeCompte's detainment on the island until public and political pressure secured his release.     This photo, however, was taken before LeCompte's April 2010 collision, so his Accent is not among these battered examples.     To see more -- much more! -- of Robin Thom's work, including an outstanding array of Cuban car images, check out his portfolio on Flickr .
Post a Comment
Read more 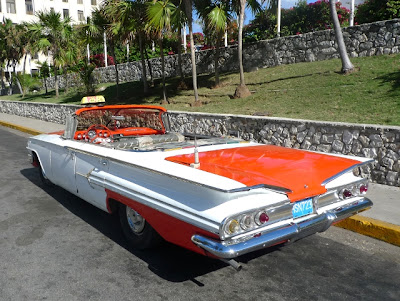 Cuba wouldn't be Cuba without its mysteries. Take a close look at this 1960 Chevrolet Impala taxi. Yes, it's a four-door convertible. Chevy made a modern-era phaeton?     Well, no, but someone in Havana did. A vestigial C-pillar bears evidence of the Chevy's original configuration as a 4-Door Sport Sedan (which, despite its name, was actually a hardtop).    Another puzzle: the Chevy has a taxi light (from Havana's now-defunct OK line) and blue government plates, but no Gran Car logos on its doors. And given its rusty fenders and tattered interior  —  not to mention its crude conversion  —  it's unlikely to be part of that agency's fleet of classics.     So is the Impala an Imposter?
2 comments
Read more 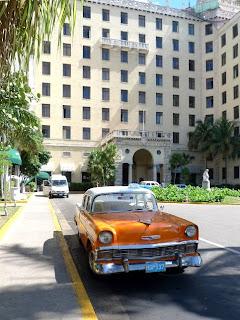 1956 Chevrolet awaits fare at Hotel Nacional. FOR A  classic view of Cuba, visitors need only hire one of the bright-painted old convertibles or sedans of the Gran Car taxi service.     The state agency's fleet consists exclusively of pre-1960 American vehicles, all bearing the blue licence plates that signify government ownership. The service was launched in 1997 at the urging of the Gran Caribe Group, the Cuban hotel operator, which had taken note of the enthusiasm tourists display toward the island's vintage cars.     Starting with a handful of classics in Havana, Gran Car by 2008 had 66 old Chevrolets, Studebakers and other makes touring the capital and the Varadero resort area, with plans to expand to Cienfuegos, Trinidad and Santiago de Cuba. Celebrity passengers have reportedly included Naomi Campbell, Jack Nicholson and cigar-fancier Arnold Schwarzenegger. Two more Chevies: a '51 in white, and a '54 in pink.      In a 2008 interview with cub
Post a Comment
Read more 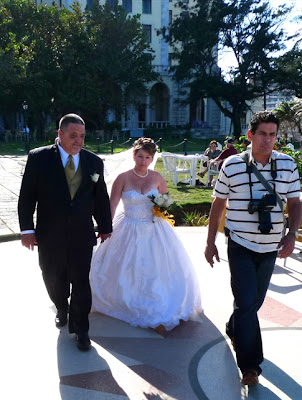 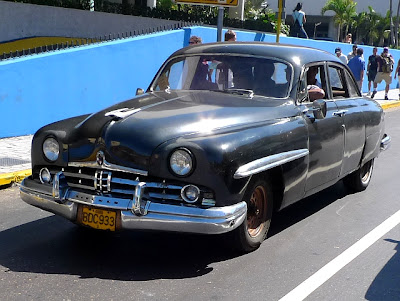 Lincoln Cosmopolitan Sport Sedan; $3,238 new in the U.S. in 1949.      Not everyone in Havana bought Cadillacs. Some bought Lincolns  —  like this Cosmopolitan Sport Sedan, introduced as the top-of-the-line model for Ford's luxury division for 1949.    The Fords and Lincolns of that year were the manufacturer's first all-new cars since before the Second World War, and the Cosmopolitan's bathtub styling could not have been more of a departure from the formal, full-fendered lines of the 1947-48 Lincolns.    With a 125-inch wheelbase, the Cosmopolitan had plenty of room for six on the chesterfield-like seats of its big cabin, and a comfortable ride from a new independent front suspension with coil springs. Its engine, however, was not-so-new: in place of the V-12 that resided under the impossibly long hoods of earlier Lincolns was a 337-cubic-inch flathead V-8 adapted from a Ford truck engine.    The big Cosmopolitan model existed for just three years; the name was assi
Post a Comment
Read more
More posts