Showing posts from December, 2014
Show all

The same the world over 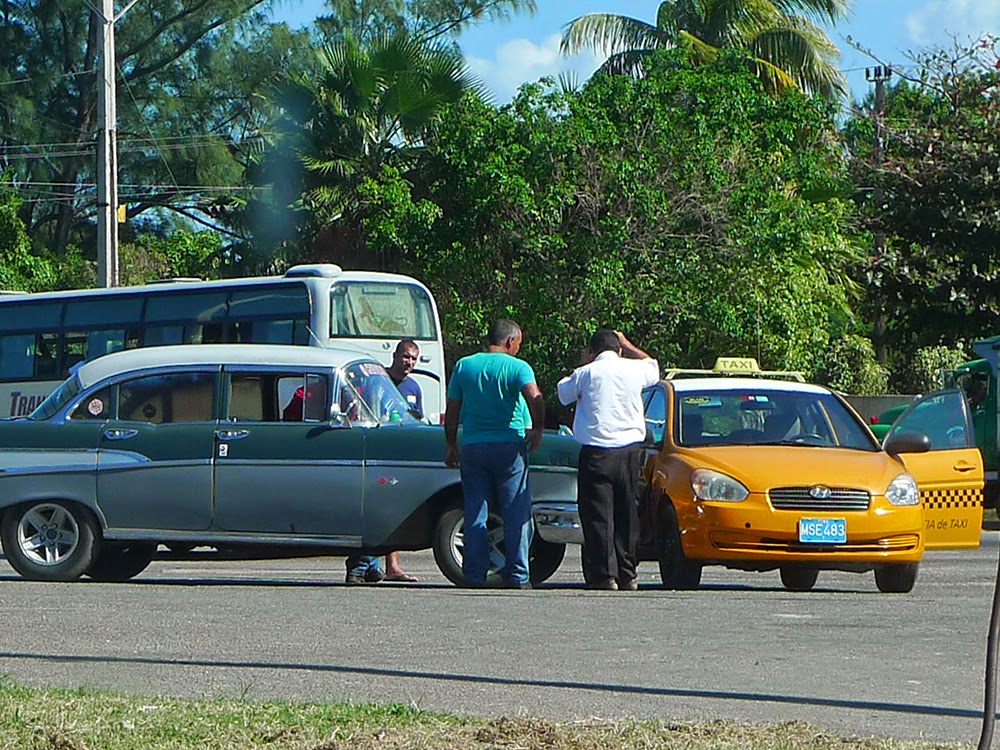 Discussion follows a collision between a 1957 Chevrolet and a Hyundai Accent taxi at a gas station in Varadero.
Post a Comment
Read more 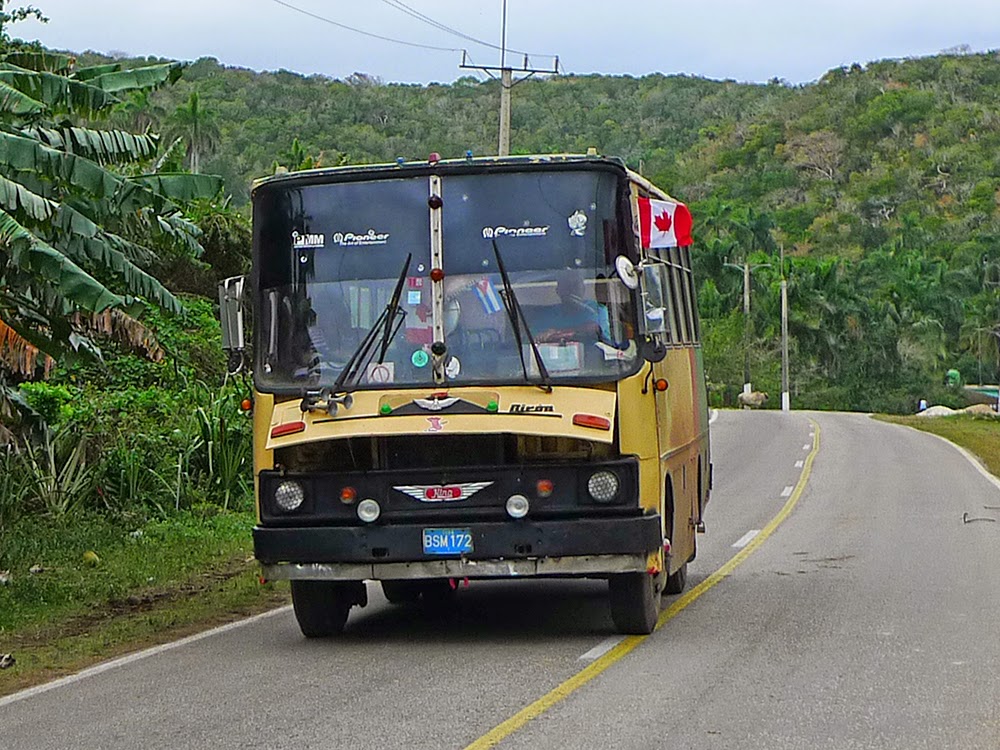 Doubt this  Girón bus was decorated with any particular holiday in mind, but today, it does make me think of a Christmas tree. Made-in-Cuba Girón, built under licence from Ikarus of Hungary.  Hino wings are a later addition.
Post a Comment
Read more 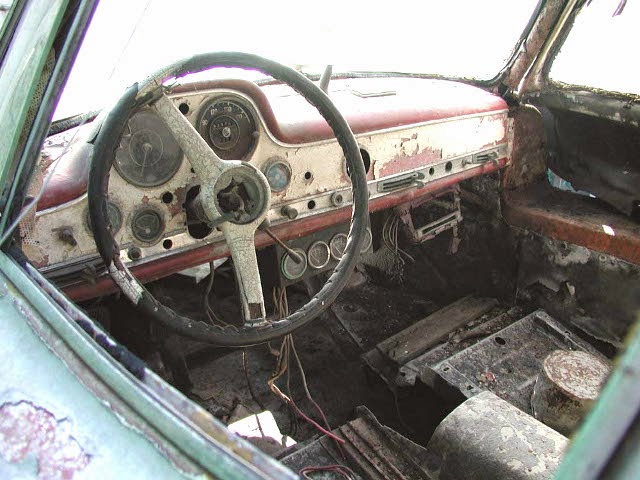 BOY, FACTS  sure can ruin a good story. Guess that's why Jan Richter of classicdriver.com didn't bother to look for any before reporting on a photographer's pursuit of the Mercedes Gullwing in Cuba.    According to Richter's Dec. 12 account , Piotr Degler Jablonksi had heard only rumours of the rusted-beyond-repair Gullwing before setting out to capture images of the island's classic cars for the 2015 edition of his art calendar .    "After weeks of unsuccessful searching," writes the Zurich-based Richter, "he was ready to accept it was a mere myth – until he caught a glimpse of something silver under a tree… "     Michael E. Ware photo, used by permission Other websites, from Road & Track to Popular Mechanics, have repeated Richter's story, some with further embroidery. Top Gear suggests Degler knew nothing of the Gullwing before he arrived, but "soon got wind of a ‘legendary' 300SL rumoured by locals to lay (sic) s
2 comments
Read more 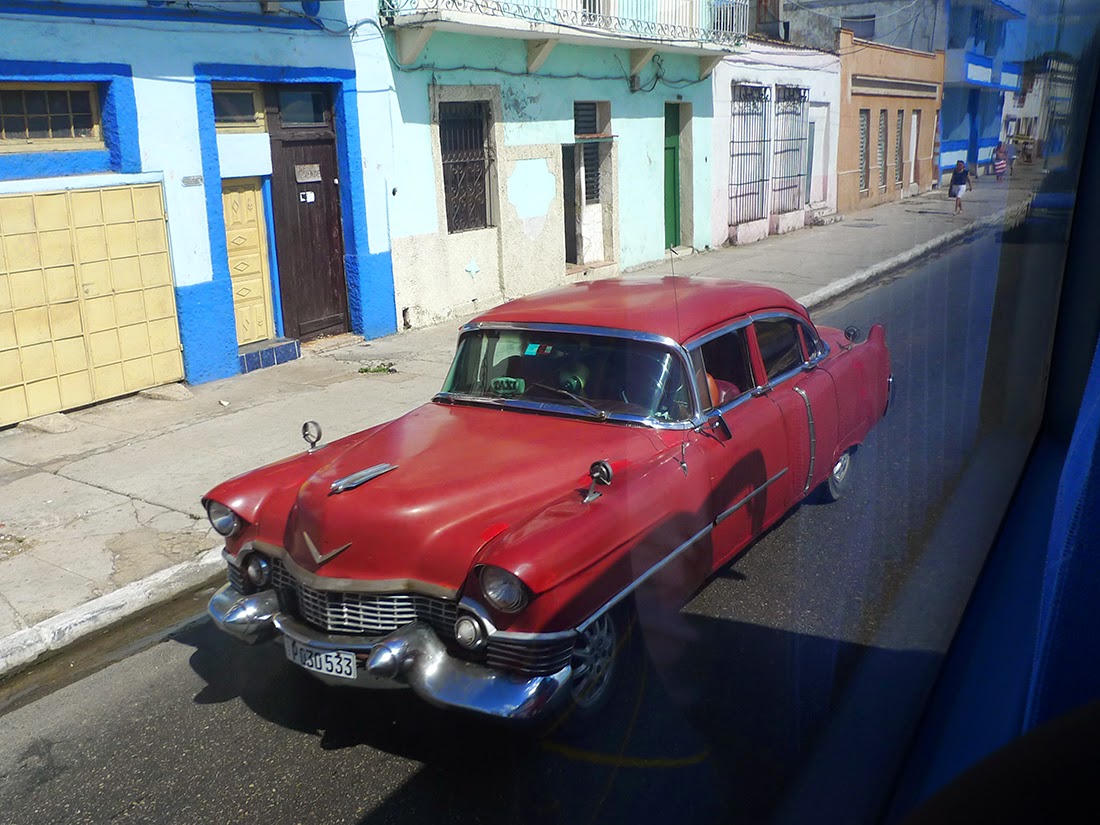 Amidst much breathless speculation about the impact of the new détente on Cuba's classic cars, Time reporter Jacob Davidson offers this cogent, well-researched assessment of their desirability to collectors. Bottom line? Um ... not much. Seen in passing, a 1954 Cadillac Series 62 sedan.
Post a Comment
Read more

Yes, they say, but what about the cars? 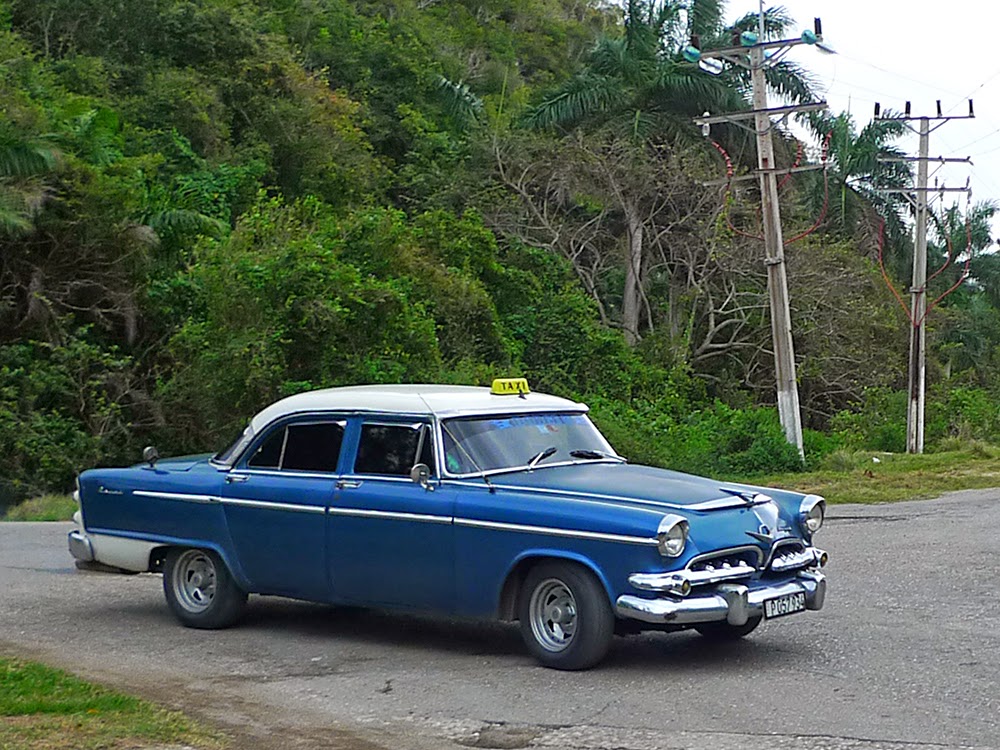 Not ready for retirement, a 1955 Dodge taxi looks for tourist fares.    THE BIGGEST biggest development in U.S.-Cuba relations since the Bay of Pigs Invasion and what are some news outlets talking about?     "The Era Of Cuba's Classic American Cars May Be Coming To An End" – Business Insider.    "How Long Can Cuba's Beautiful Classic Cars Last?" – CNN.     "Cuba Trade Could Benefit Car Collectors, Automakers" – USA Today.    C'mon folks. While people might expect such speculation from, well, car-crazy blogs like this, they look to organizations like yourselves for broader perspective on today's historic announcements from Barack Obama and Raúl Castro about the thawing of a 54-year ice age.    Then again, the ancient, pre-revolution American autos that still serve so many Cubans are what many outsiders think of first when the topic of the Caribbean island nation arises.    What will happen to the old cars? It's far too earl
Post a Comment
Read more 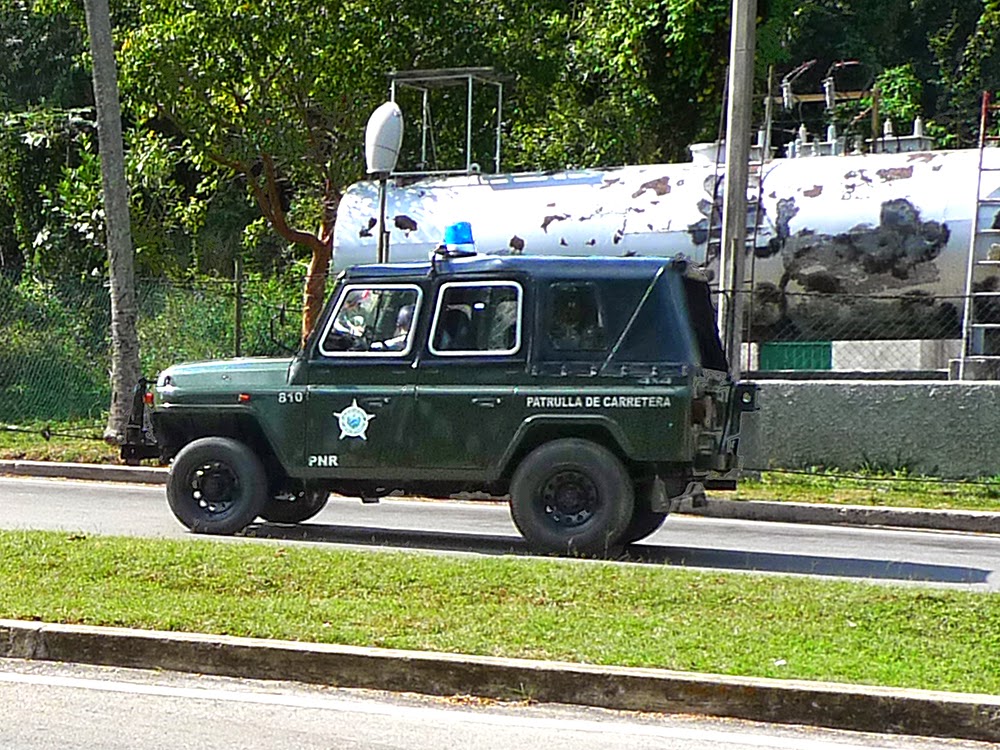 A special, Cuba-only UAZ 469? Or something else entirely?     IN EARLY episodes of television's Highway Patrol , Broderick Crawford as Chief Dan Mathews drove a 1955 Buick Model 68 Century, a police-only two-door sedan with 322-cubic-inch V-8 engine.    Young car watchers (here!) had no trouble identifying it, or any of his later rides that ranged from Plymouths and Dodges to Oldsmobiles and Mercurys.    But this Cuban Patrulla de Carretera truck has me stumped.    From Russia or one of its former satellites? Has to be. But I've gone through the Soviet catalogue from ARO to Zil without putting a name to this square-rigged four-by-four.    Closest, maybe, is the UAZ 469 that succeeded the GAZ-69 army truck of the last post . But the Cuban police vehicle is chunkier, with straight-cut wheel openings in place of the 469's more angled fenders. And its door handles are lower.    I did learn that UAZ had – maybe still has – an assembly plant in Camaguey, Cuba, the Empr
2 comments
Read more 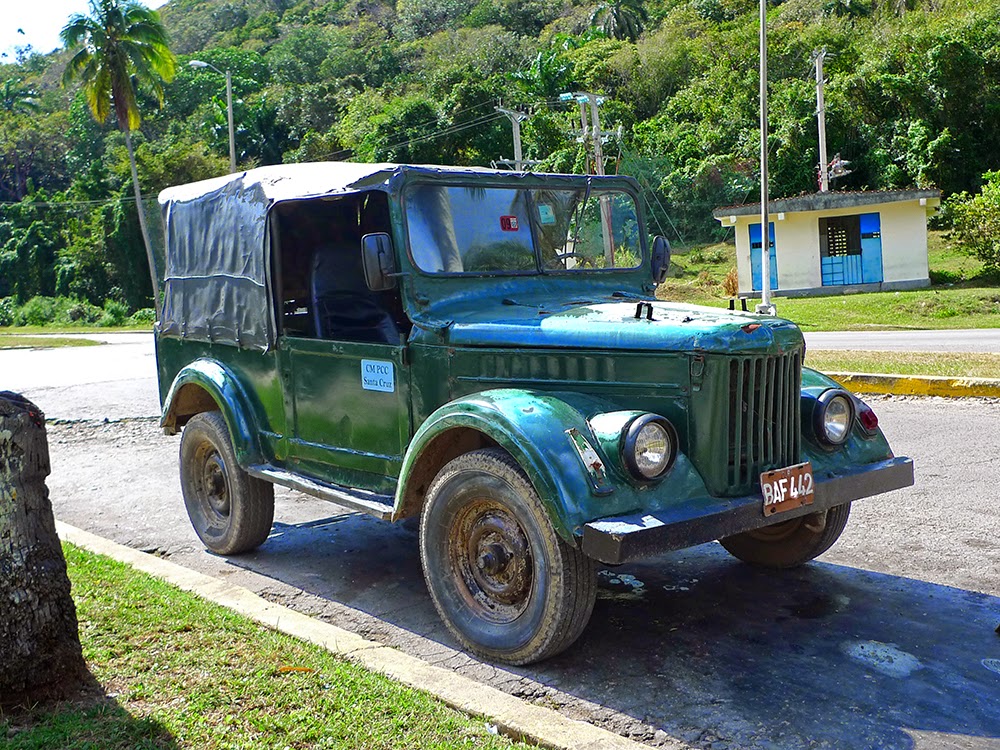 Russian-built GAZ-69 was introduced in 1953, with a design from an earlier era.     IN RUSSIA , the nickname for the GAZ-69 is "Kozel," or male goat. It is not a compliment.    Call someone a kozel, and you are suggesting he is stubborn and stupid.    When the name is applied to this prosaic four-by-four, however, there could be some admiration mixed with the disdain. As this battered Cuban example attests, the Kozel is virtually unkillable. And despite its tractor-like looks, the Kozel is said to have a surprisingly soft ride, thanks to long leaf springs fore and aft.    The GAZ-69 was introduced in 1953 as the Russian army's basic light off-road truck. Its styling looked dated even then, reflecting a long, seven-year development period. Three-speed gearbox, dual-range transfer case.    Production began at the Gorky Automobile Factory but soon moved to UAZ (Ulyanovsk Automobile Plant). Between the two, more than 630,000 Kozels would be assembled by the end
Post a Comment
Read more
More posts