Showing posts from August, 2015
Show all

Nomad on an island 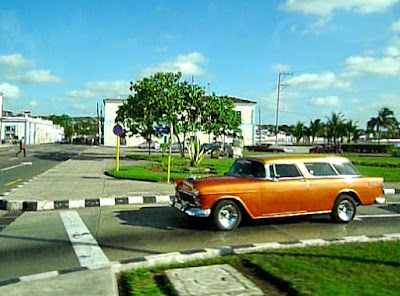 Rare sight: A 1955 Chevrolet Nomad two-door wagon     SOME TIME back, CARISTAS reader Paul voiced a hope that any Chevrolet Nomad in Cuba had not been irreversibly altered, and I realized that I had never come across one of Chevy's delightful two-door station wagons on the island.    This was surprising, given the presence in Cuba of late-1950s Corvettes, Continental Mark IIs and other classics produced in far fewer numbers than the 22,000 Nomads built between 1955 and '57.    Surprising too in that station wagons would appear to have sold well in Cuba in the '50s, though perhaps Cuban wagon buyers, even more than their U.S. counterparts, valued utility over style.    Then, riding on a bus through Matanzas – one of my favourite car-spotting locales – I glimpsed a gold-over-copper '55 Nomad at a traffic light. My camera was in video mode and I wasted time switching to the photo setting, and as a result didn't get a good shot in either mode.    Still, the i
Post a Comment
Read more 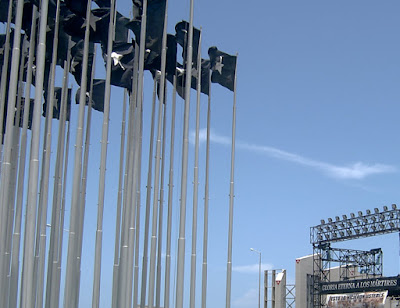 Havana's former flag thicket. Wikipedia photo by Angelo Lucia.    NOT SO LONG  ago, the plaza separating what was then the U.S. Interests Section building in Havana from the Malecón waterfront boulevard was home to a forest of Cuban flags – part of the long-running propaganda war between Cuba and the United States.    Today, the plaza's flagpoles stood bare, allowing a unimpeded view of the ceremony to raise the Stars and Stripes outside the newly reopened U.S. embassy.    The now-clear sightlines had an additional purpose.    Perfectly positioned on the Malecón to appear in the camera shots behind U.S. Secretary of State John Kerry was a trio of handsome old Chevrolets: a two-tone '55 sedan, a black '59 Impala four-door and the king of classics – a red '57 Bel Air convertible.   The message? American tourists, your rides await. Old Glory and old glories, as captured in a video by CCTV America and posted on YouTube .
2 comments
Read more
More posts