Showing posts from May, 2013
Show all

Miguel Llorente in Cuba.    Miguel Llorente, the young adventurer who tracked down a Mercedes-Benz Gullwing and other exotic cars in Cuba, has had a close call in Colombia.    Miguel was driving his Mercedes 300TD wagon, "Livingstone," on a mountain road when a truck rounded a corner in his lane. He swerved and his right wheels dropped into a concrete drainage channel. Then the beige wagon was slewing back across the roadway into a Kenworth 18-wheeler and down into a ditch, coming to rest on its roof atop a rainwater reservoir.    Passersby pulled Miguel from the car and waited with him for an ambulance. After a short stay in hospital he still has back pain, but amazingly, he didn't break any bones or suffer other serious injuries.    Livingstone? Not so lucky. The 30-year-old Mercedes in which Miguel set out from Kansas months ago is a mangled mess. Its inner structure held, however, and he credits that safety cage for saving him.    The accident hasn't taken
Post a Comment
Read more

Two at rest, one at work 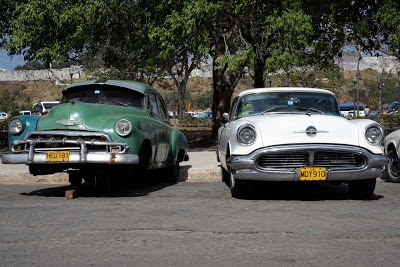 Chevy in mid-repair is a '52 Styleline; Olds is a '56 Holiday, or maybe a Super 88. Call that a cab! Chevrolet truck from '53 or '53 collects passengers.
Post a Comment
Read more 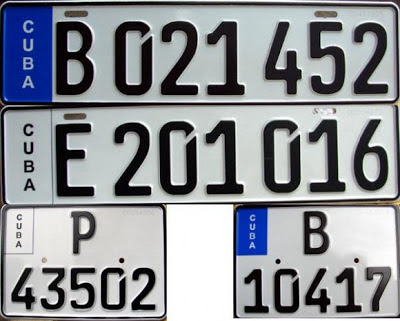 Possible prototypes of Cuba's new markers. Images: www.kubafotos.com      For a decade, Cuba's colour-coded licence plates have been a highly visible part of the island's automotive scene.    But this month, Cuba begins the retirement of the system that allowed an observer – let's say a motorcycle cop tucked behind a "Patria O Muerte" billboard – to know from a distance whether a car was privately owned (yellow plate, good to ticket), rented by a tourist (red, even better) or operated by a government agency such as the all-powerful Ministry of the Interior (green, uh uh).    Now, all privately owned cars, trucks and motorcycles will wear plates with black letters on a white background. State-owned vehicles get the same drab, two-colour scheme, but with a dab of blue on the side or in a corner.    And this isn't the only change. Cuba's licence plates have long conformed to the rectangular, six-by-12-inch (155 by 305 millimetres) format used
1 comment
Read more 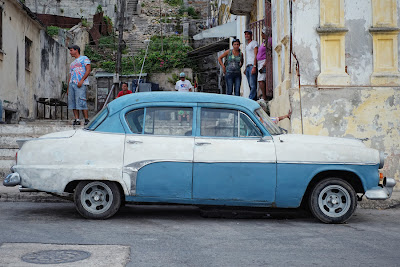 Chrysler products for foreign markets in the 1950s blended Dodge and Plymouth styling.    The once bright, now soft shades of this 1954 Dodge or Plymouth sedan – it's a Chrysler export model, so it's probably a bit of both – remind me of the work of Montreal artist Susan Pepler.    Cuba's old cars are a favourite subject of the "painterly realist," who brings to her canvases a careful attention to shape and detail, overlaid with impressionistic brush strokes that convey the movement of light and shadow under the Cuban sun.    Several of Pepler's Cuba paintings are on display at Montreal's Le Meridien Versailles Hotel until June 30. See also: www.studiosusanpepler.com
Post a Comment
Read more
More posts