Showing posts from April, 2010
Show all

While we continue to seek the Mercedes-Benz Gullwing and the less exotic, but even more elusive Batista 1956 Chevrolet Corvette, our friends over at Hemmings Blog have been in pursuit of their own Cuban curiosity – a mysterious “skycar” that was demonstrated at the 1959 Havana International Auto Show.    Guess they are the better sleuths, however: in no time flat, they found that the auto-plane combo was an Aerocar, one of six designed and built by Moulton Taylor of Longview, Washington.    An American named Thomas Weitbrecht flew the Aerocar from Key West to Havana, where he showed it off for 10 days in the hope of attracting sales. None resulted, but  Raúl Castro did pose for a photo at the controls.    Perhaps  Raúl  would like to order some Aerocars today for the citizens of Cuba.    Perhaps not.    Hemmings, by the way, learned about the skycar from Che’s Chevrolet, Fidel’s Oldsmobile , the 2004 work Richard Schweid that we know to be the definitive history of cars in Cu
Post a Comment
Read more 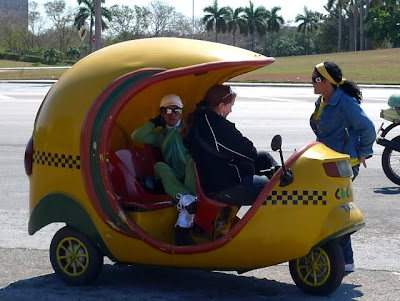 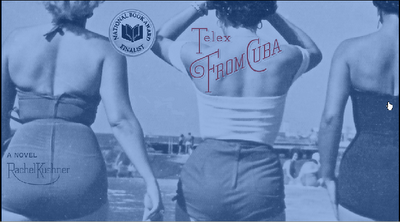 Rachel Kushner’s Telex from Cuba (Scribner 2008) follows the lives of American sugar plantation managers and their families in Oriente province as Fidel, Raúl and their followers descend from the mountains. This fresh and revealing perspective is just one strength of a novel that captures the texture of Cuban life in the 1950s, from the hierarchy of skin tone to the secret to skinning a pineapple in a spiral. The source of such detail could only have been Kushner’s mother, who grew up in that American community in eastern Cuba.    And in that rich texture, this  intriguing thread:    “ ‘The town of Palma Soriano has officially fallen under rebel control, according to Cuban news sources.’ There was television footage of roadblocks and tanks, people cheering in the streets. Then an old Hollywood actor, the star of a film Everly had seen in Nicaro, waving from a silver sports coupe with gull-wing doors. Cubans flowed around and past the exotic car as if he and it didn’t matter
Post a Comment
Read more

Renting a car in Cuba: You won't drive a bargain

Rex is reportedly Cuba's most expensive agency, but with a fleet ranging from the Seat Córdoba (a Spanish-built Volkswagen) as budget choice to the Audi A6 (right) as luxury ride, it has the best cars. Havanautos also specializes in high-end vehicles. Micar or Panautos could be the cheapest agencies, if you can connect with them. But remember, all are state-controlled, so don’t expect any price wars. I’ve dealt only with Cubacar, a mainstream agency with a selection running from the little Hyundai Atos to the Hyundai Sonata and Peugeot 307 CC. My choice, a Hyundai Accent sedan, fell into Category E – medium-sized with air conditioning. This year, my three-day rental – the minimum period for most bookings made from outside Cuba – came to a total of $383.45 Cdn. That includes $279.55 paid to the Canadian booking agency when I made the reservation, and $103.90 collected by Cubacar when I picked up the car. That last sum covered the mandatory 15 CUC daily insurance fee and a full t
2 comments
Read more
More posts