Showing posts from June, 2010
Show all

Took a bit longer than I expected, but a group called Help Cody LeCompte has been set up on Facebook. There you can find details about the bank account where donations can be made to help with accommodation and other costs while the young Canadian awaits trial, and the barbecue fundraiser scheduled for July 13 at the Simcoe, Ontario, courthouse. At this writing, 106 people have joined the group.
1 comment
Read more

June 20, 2010
According to the Toronto Globe and Mail, Cody LeCompte's mother is paying about $360 a week for her son to stay in a Cuban resort while he awaits a trial. The report also quotes the LeComptes' travel agent as saying he has had two other clients detained in Cuba under similar circumstances -- one for six months, the other for almost a year.    Given the attention this case is getting, however, I predict Cody will be back in Canada before long.
Post a Comment
Read more 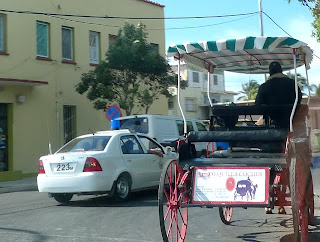 It seems that detained tourists in Cuba are put up in beach resorts while the island’s wheels of justice grind along like the gearbox in a Russian tractor.   Cody LeCompte, a 19-year-old from Simcoe, Ontario, has been forbidden from leaving the island since an April traffic accident in which the rental Hyundai Accent he was driving (hmmm, sounds familiar) collided with a dump truck. LeCompte and his three passengers were injured, and all spent time in hospital.   Since then, LeCompte has been staying at a resort in Santa Lucia with his uncle. It's not clear who’s paying the bills. Although the family insists the other driver was at fault, a Cuban court this week apparently decided that LeCompte must stand trial. His mother told reporters she’s heard the trial may not take place for six months to one year.   Canada’s Foreign Affairs department says traffic accidents “are a frequent cause of arrest and detention of Canadians in Cuba” -- although if that’s the case, such in
4 comments
Read more

June 14, 2010
Pieralfonso Longo came across a Mercedes-Benz 300SL Gullwing in Cuba in 1978.    It was the summer Cuba played host to the World Festival of Youth and Students, a left-wing gathering taking place for the first time in the Western Hemisphere. A reported 18,500 young people from 145 countries came to Havana that August to rally for “anti-imperialist solidarity, peace and friendship.”    Longo, an Italian and a photographer of some note, saw the Gullwing parked at a beach area. Its paintwork, an unfortunate shade of mustard yellow, looked original. Standing next to it was a motorcycle policeman. The car's doors were open, and seated on the sill on the driver’s side was a bluejeaned man with dark, slicked back hair.    “ ‘Elvis’ was a sort of police or tourist chief there,” reports Longo, who took a photo of the scene that you can see here .
2 comments
Read more

Recent posts about a certain website’s wide-eyed excitement over the potential value of rare cars in Cuba seem to have struck a nerve. “I don’t feel it is helpful that you disparage our information in an effort to build your blogsite/reputation,” the site’s author responded in a message.    OK, maybe I was a tad harsh. (Though not to enhance my reputation, which, we all will agree, is beyond salvage.) But here’s the thing. Cuba’s classics – from sturdy Ford sedans to prized European exotics – are a collective treasure. For the enthusiast, the sight of so many pre-1960s cars puffing along in daily use can be as thrilling as a trip up the Amazon to a birdwatcher, a backstage pass to a rock fan.    And even the person who normally cares little about cars cannot help but be moved by the bright colours and bold lines of these vintage vehicles (an expression of post-war confidence, and so different from cars today), and by the message their long service conveys about the depth of con
Post a Comment
Read more
More posts