Showing posts from July, 2009
Show all

So who bought all the Cadillacs? 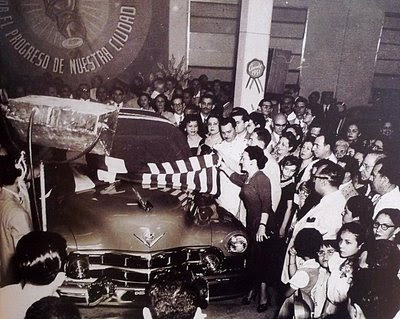 The Godfather Part II notwithstanding, Havana in the 1950s was hardly a hotbed of Mafia activity, reports Peter Moruzzi in Havana Before Castro: When Cuba was a Tropical Playground .     Yes, organized crime figures, notably money guy Meyer Lansky, were present, but mainly to protect Mob investments in Havana’s casinos by ensuring they were run in a reputable fashion – just as the Mafia made sure the early Las Vegas gambling sites were seen as safe and always above board.     And if you control casinos, who needs to rob or extort? Better to maintain a low profile.     Whether it was Lansky and his cronies or others, however, someone was buying a lot of Cadillacs. Havana is said to have been home to the world’s busiest Cadillac dealership in the 1950s. I don’t know the source for this claim, but I do know Cadillacs remain a common (and enjoyable) sight on Cuba’s streets.     These photos from Havana Before Castro (original source unknown) show two Cadillacs that may well be
1 comment
Read more

Pipedream Chuck, he's a friend of mine

July 06, 2009
Something called " Classics Illustrated Blog Archive " liked the previous entry so much, it decided to rip it off without attribution. The process, however, apparently involved translating the entry into German and back to English through one of those automated programs. Thus: "Full chapters are committed to the Riviera, pipedream chuck of mobster Meyer Lansky, and the effective Habana Hilton, renamed the Habana Libre by the revolutionaries who took power damned months after it opened."   Well said!
Post a Comment
Read more 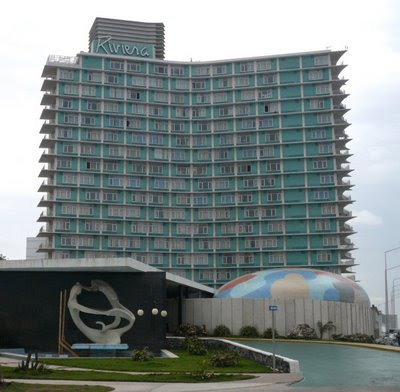 Riviera Hotel in Havana, 2009    Cuba’s much-photographed De Sotos and Cadillacs are famous reminders of the wealth and style that could be found in the country – or at least, in parts of it – in the 1950s. But another, less-heralded legacy of that period is the Modern architecture that would take form in such bold structures as the Arcos de Cristal indoor cabaret at the Tropicana nightclub and the Havana Riviera hotel that stands proud over the Malecon.    Strongly influenced by Miami Modernism from across the Straits of Florida, the Havana Modern school nonetheless remains distinctive for its fusion of clean, Atomic Age shapes and the deep eaves, interior courtyards and other time-tested design strategies for coping with a tropical climate.    American writer Peter Moruzzi believes Havana Modern merits as much celebration as the remarkable colonial buildings that have earned La Habana Vieja (Old Havana) designation as a UNESCO World Heritage Site. Yet it remains “largely ignor
Post a Comment
Read more
More posts