Showing posts from July, 2012
Show all

Coming across a neat old car in Cuba is always a pleasure. But getting to see a rare, auto-related artifact from Cuba – one that I feared might never surface – is a singular delight.    I had heard about this Canadian-produced commercial years ago. Filmed in Havana, it was meant to show how Cubans treasure their long-serving Chevrolets. Durability, value, the bond between vehicle and owner – it's hard to imagine a better set of feel-good messages that could be captured in a 60-second spot.    Back in Canada, however, problems emerged. First, the story went, concerns were expressed about the thickly accented English of the lead actor and narrator. A decision was made to re-record the audio with the voice of a different actor.    Perhaps there was dissatisfaction with the dubbing. Perhaps – and this would seem more likely – there were second thoughts about airing a commercial that would inevitably be seen by Americans, and that could offend a nation so long at odds with the po
Post a Comment
Read more 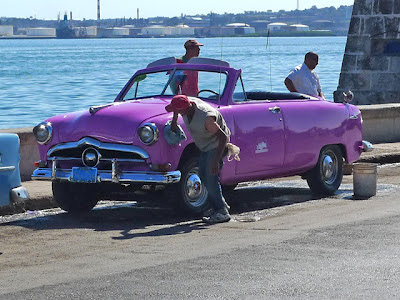 Still working away on Part 2 of the Moskvich story (yeah, I know, so unfair to keep you in suspense). In the meantime, just to satisfy your Cuba car craving, here's a convertible from the Gran Car taxi fleet getting a wash alongside the Havana Harbour. Have to admit, this 1950 Ford Custom Deluxe cleans up pretty good.
Post a Comment
Read more
More posts