Showing posts from March, 2013
Show all

No wonder they won the war 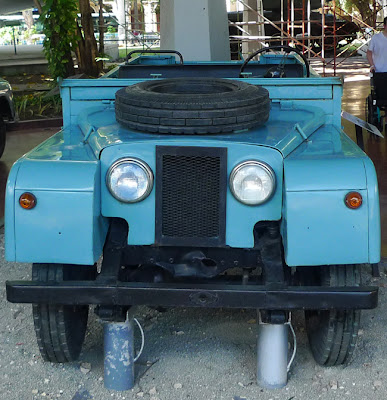 Baby blue: Fidel Castro's Land Rover Series 1 at the Granma Memorial.    Sturdy four-wheel-drive trucks from three nations – and three continents – carried Cuba's revolutionary commanders in their battles with the government troops of Fulgencio Batista.    From Britain came the Land Rover Series 1 station wagon that served Fidel Castro in the Sierra Maestra forests in 1958 as he directed raids on the towns below. Today that Land Rover rests on concrete pylons in Havana, on permanent display at the Granma Memorial.    It still carries the marks of "several bullet impacts," as its placard observes, but it's been painted a cheerful light blue that might not have been its original colour. The curators have shown they are not slaves to historical accuracy – a nearby Pontiac, also blue, was industrial grey not so long ago.    As a station wagon, the Land Rover would have come with a detachable, vented roof that ran the length of its long passenger compartment d
Post a Comment
Read more

Don't even think about it 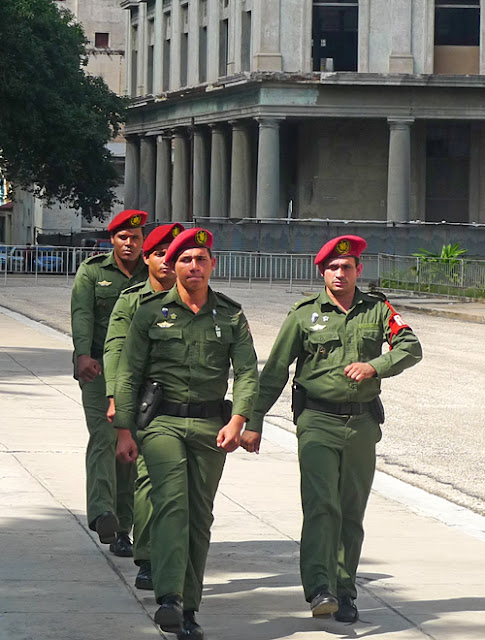 Changing of the guard between the Granma Memorial and the  Museo de la Revolución.    The reverence in which Cuba's leaders hold the artifacts of their long-ago struggle – the cars, the planes, the boat that carried Fidel Castro and his followers from Mexico to Cuba – is evident in the number of soldiers at the Granma Memorial.    They stand on the catwalk beside the glass case that encloses the yacht; they walk quietly among the displays below. They change the guard in red-bereted unison on Calle Colon, now a fenced square between the memorial's eternal flame and the Museo de la Revolución, but 55 years ago a Havana thoroughfare-turned-battle zone .    You cannot touch the Granma yacht. You could, I suppose, touch the other items, but it doesn't seem advisable.    The soldiers look away from visitors. They are not there to engage in conversation. But I manage to catch the eye of one young guard and mime spinning the two-bladed propeller of a Kingfisher observation
1 comment
Read more 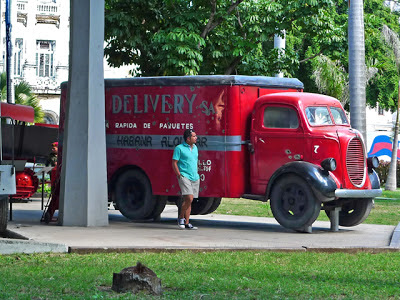 Ford COE (cab-over-engine) truck carried rebels to Batista's palace.     In "11/22/63," novelist Stephen King explores – at length – the different course history might have taken had Lee Harvey Oswald failed to assassinate John F. Kennedy on that early afternoon in Dallas.    When I look at the Ford truck at the Granma Memorial, I too think about history and assassinations. But here, I wonder how events might have unfolded had an attempt to kill a president not failed, but succeeded.    It was Wednesday, March 13, 1957, when the red van, 20 years old and still bearing in Spanish and English the markings of the delivery company that once owned it, pulled up at the Presidential Palace in Havana. On this day it was delivering 42 armed men, part of a force intent on removing Fulgencio Batista and restoring Cuba's constitutional government.    The attack was orchestrated by a young firebrand named José Antonio Echeverría, whose Directorio Revolucionario group was
Post a Comment
Read more

Bright soldiers of the Revolution 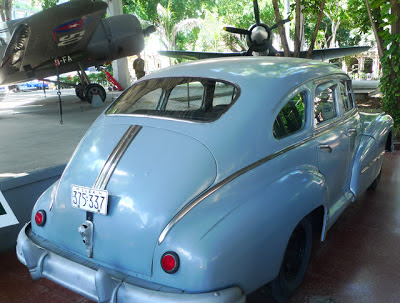 Batista opponents ferried weapons in this 1948 Pontiac Streamliner Deluxe sedan.    Preserved under a thick gloss of paint, the vehicles arrayed at the Granma Memorial provide a full-fendered view of transportation in Cuba in the late 1950s.    Of course, so do the cars and trucks chugging along the Havana streets outside the Museo de la Revolución , which is home to the memorial. And there's no admission charge to see them.    Yet the collection is well worth the memorial's modest, 2-CUC (or so) admission fee, both for its direct connection to historic events – here, for example, are the trucks in which Fidel and Raúl Castro traversed the steep slopes of Oriente Province as they led their rebel forces – and for its lessons on how the revolutionaries embraced and adapted the technology of the day for their guerrilla warfare.    You'll see a delivery van that became a troop carrier for an assault on Batista's palace, and a tractor transformed with thick plating in
Post a Comment
Read more
More posts