The old man and his Chrysler

Papa owned a Lincoln, a Buick, but at heart, Papa was a Chrysler man. His Wheeler Playmate cabin cruiser, the Pilar, had two engines. The 50-horsepower Lycoming ran alone when he sought marlin and sailfish and German submarines. The Chrysler Crown reduction engine added its 70 horsepower for the runs between islands, throttles open, fans expelling the volatile fumes from belowdecks.
Early on in Cuba Papa ferried his son Gregory's baseball team, the Gigi Stars, in a Chrysler. Decades later the boys, now old men, would remember jamming in, a jumble of brown arms and legs, for the games at the Club de Cazadores.
In 1953 he bought his fourth and last wife, Mary, a Cranbrook convertible. It was from Chrysler's Plymouth line, a yellow car with wire wheels.
Then in 1955 Ernest Hemingway paid $3,924 for a Chrysler New Yorker DeLuxe convertible. To the Cubans, seeing it driving between Finca Vigía – the Lookout Farm – and the Pilar's berth in Cojimar, it looked red and white. The manufacturer said Navajo Orange over Desert Sand.
In July 1960 Papa left Cuba for the last time, carrying his depression, his accident scars, leaving his boat, his convertible, his 57 cats. A year later at his other home in Ketchum, Idaho, he pulled the triggers of his shotgun and was dead.
Finca Vigía came into government hands. Seized by Castro's Communists, said some. Donated by Mary, others said. Today it is a museum where tourists pay 3 CUC to look through the windows at Hemingway's animal trophies and bathroom scale and 8,000 books – 5 CUC more if they want to take photos. Under a nearby shelter gleams the Pilar, a Viking boat awaiting its chieftain.
The Chrysler New Yorker? Hemingway's driver, Augustin Nuñez Gutiérrez, took it away, the stories said, and hid it from the authorities who wanted it for the museum. Hid it well.
Yet in late 2010 the carcass of a Chrysler convertible, sides eaten by rust, soft top long missing, was dragged to the Lookout Farm. Of the 950 New Yorker DeLuxe convertibles made in 1953, said the government, this is Hemingway's.
Confirmation comes from Christopher Baker. On his Moon Travel Guides blog he tells of seeing the Chrysler's serial number and the matching number on the insurance policy Hemingway took out. He tells of museum director Ada Rosa Alfonso's discovery that Hemingway's doctor, José Luis Herrera Sotalongo, had the Chrysler from 1961 to 1973. Then it passed to the doctor's son. Then to "a long list of connected individuals that ends with the last known owner, Leopoldo Nuñez Gutiérrez, in whose garage the vehicle was found." That final name perhaps pointing to some truth in the earlier stories.
The convertible's bodywork will be repaired and repainted in the correct colours, Baker says. Its leather upholstery will be renewed. Its 331-cubic-inch hemi V-8 will fire once more.
And then it will go on display near the Pilar, where visitors can see the car and the boat and imagine a different end to the Hemingway story. One in which the Cojimar villagers in the darkness hear one Chrysler engine stop and another start. And later, rising to prepare for the day, see the flash at sea that foretells the dawn. 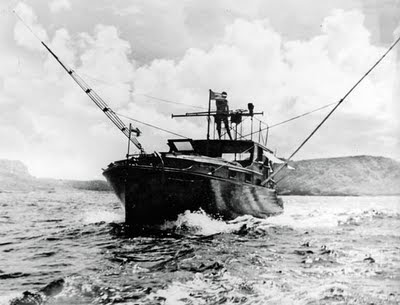 Anonymous said…
I read an article on this car about 20 years ago. From what I recall white housepaint was used on the exterior,regular instead of auto-quality canvas was used for the convertible top and a battery from a tractor was used to start the car! It's a shame it went downhill from there. Hopefully it will be restored to its former glory.
May 14, 2011 at 6:11 PM 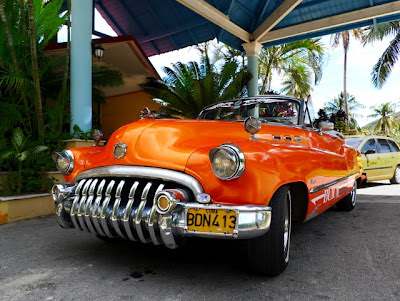 For hire: 1950 Buick Super convertible.    Some of Cuba's finest old cars are running up a lot more miles these days.    The reason? The island's 2010 relaxation of rules about self-employment.    Of 178 activities newly opened to those willing to give capitalism a whirl, private taxi operator seems to have been a popular choice. And more than one neophyte cabbie appears to have quickly twigged to the appeal of a desirable classic car in securing big-tipping tourist fares.    These private cabs, seen today in every resort area, are not to be confused with the handpicked antiques of the government-run Gran Car service, or the plodding Havana sedans and wagons that serve as fixed-route collectives.    These are family cars  —  often heirlooms handed down through generations  —  and until recently in private service (at least as far as the government was concerned). Today, they're very much in the public eye.    Visitors to Cuba will like this. Now they're more l
Read more