I had seen the Čezeta scooter only in photographs. Then, one afternoon this month in Havana, I spotted not one but two real-life examples of the strange, Czechoslovakia-built two-wheeler.

Only in Cuba.
One was coming toward me on a highway; I caught just a glimpse of it. But the veteran Čezeta you see here, with bumblebee-theme paint job, was parked for my leisurely perusal on Avenue Maceo, between the harbour and the tourist-crowded Old Havana district.
The Čezeta is odd-looking enough in photos, the seeming result of a marriage of a torpedo with a coffee pot. See a real one and your reaction can only be: "Yikes!"
Yet this scooter was designed for practicality. Built from 1957 until 1964 by the merged motorcycle companies CZ and Jawa, the Čezeta has a long, dual saddle concealing a big luggage compartment; an optional trailer was available for still more storage. Its long snout, which reportedly spurred some owners to nickname it "The Pig," houses the fuel tank for the 175-cc (later 200-cc) two-stroke engine. The fixed front fender assembly, though limiting front wheel travel, shields the rider from road spray.
I don't know if it makes coffee. 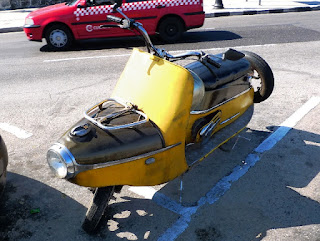 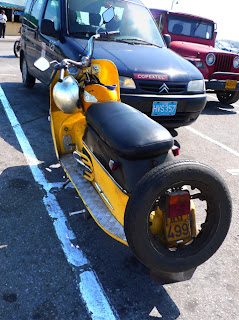 See also: A Cushman, no, a Cusman, in Cuba