ANOTHER RARE and desirable car has surfaced in Cuba – this one a race-prepared Aston Martin DB 2/4.
And unlike Cuba's infamous, rotted-to-ruins Mercedes Gullwing, the 1958 Aston Martin is said to be salvageable, if only barely.

The source of this assessment is none other than premier U.S. restorer Jonathan Ward, who came across the British hatchback – yes, the DB 2/4 is a hatchback – on his first visit to the island (Ward, like so many Americans, wanting to get to Cuba before all the Americans get to Cuba). 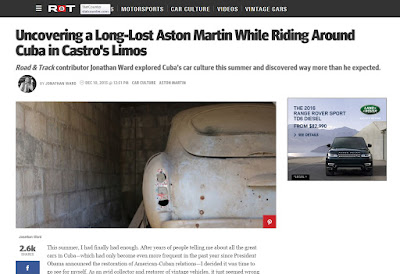 Writing at roadandtrack.com, Ward reports riding in a Chaika M14 taxi to a farm an hour outside Havana, where he was shown the Aston Martin resting under a blanket of dust in a shed.
"As our eyes adjusted to the dim cavern, we saw the unmistakable buttocks of a British sport car," he relates. "I immediately knew what we were looking at."
Ward, founder of ICON 4x4, the Los Angeles shop that modernizes old cars and trucks for wealthy enthusiasts like Jay Leno, was disappointed by his next discovery. The Aston Martin's dash, steering column and even its engine had been replaced with parts from a Russian Lada, the ubiquitous Cuban donor car.
Still, "littering the dirt floor" were at least some of the original parts, and Ward tells of his dream of seeing the car restored to compete in a revived Cuban Grand Prix.
If anyone could make at least the first part of that dream happen, it would be Jonathan Ward.