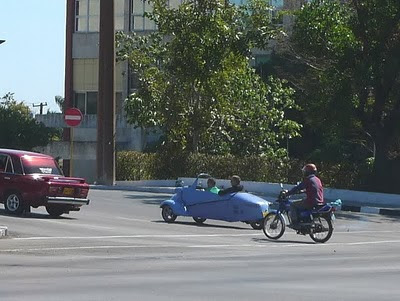 Isettas aren’t the only microcars still doing their micro thing in Cuba. Here’s a Messerschmitt three-wheeler I saw passing the Plaza de la Revolución. The tandem-seat Messerschmitt was built from 1953 through 1964 at a factory of the famous German aircraft manufacturer. This one looks like a post-1957 KR201 roadster model, though it might be an earlier (hard canopy) KR200 that’s been converted. A couple of neat things about the Messerschmitt: Its single-cylinder two-stroke engine came equipped with a second set of breaker points, allowing it to run backwards to reverse the little car. And because of that design, all four transmission gear ratios can be engaged when backing up!
bubble car bubblecar Micro car not Michael Bublé‎