How to rent a car in Cuba, Part II: That will teach me

February 22, 2009
Tempt fate, and fate usually responds. A few weeks back (see entry), I speculated that last year’s rental car would again be waiting for me when I returned to Cuba this month.
Naturally, when I approached the agency office, paperwork in hand, no car awaited me. The chagrined-looking clerk asked me to come back in a couple of hours, and even as I was leaving had picked up the phone to Havana.
The car arrived as promised and – go figure – was the white Hyundai Accent I had last year, though now with stains on its seats, a few scrapes on its sides and an odometer that read 42,000 kilometres, an increase of 34,000 in 12 months. It still had all its badging – in Cuba, any car nameplate is a trophy – but I noticed that the front Hyundai emblem now was riveted on.
Yet even after the passage of a full rental-car year (equivalent to seven years for a private car), the Accent ran fine. The tie-rod ends and front struts rattled a bit – no surprise given the frequent pothole shocks a Cuban car suffers – but the Hyundai zipped along, even with four occupants, and handled as easily as I remembered. Good sturdy car.
Most Cuban rental offices, by the way, are in the usual spots: hotels, airports, resort areas. I was surprised, though, to come across a Via Rent A Car outlet tucked away in the Jardines de Hershey, a quiet botanical park two kilometres from the small town of Camilo Cienfuegos. Again go figure.
Poor business location notwithstanding, the office appeared not to have completely escaped notice. Its small fleet of Peugeot 206s was missing hubcaps and emblems. 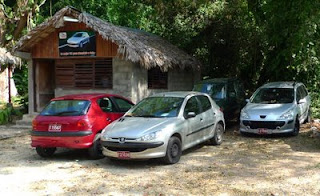