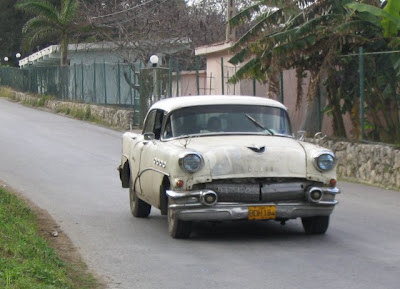 Studying the island growing on the horizon, Christopher Columbus exclaimed: “Zowie! Is that not a ’56 Buick Roadmaster?”
Replied a nearby sailor: “Indeed a Buick. But I believe it to be a Century. Or perhaps, a Special.”
OK, Columbus and company reached about 500 years too early for that exchange to have taken place. Instead, the explorer remarked that this was “the most beautiful land that human eyes have ever seen.”
Granted, tended to label all he encountered on his voyages – harbours, trees, native women – as especially beautiful. But the many who have followed him to will agree with his assessment of the tropical island.
For the modern-day visitor, though, the turquoise bays and dusty green hills that so impressed are just part of the allure. ’s beauty today resides as well in the easy grace of its people, and in the moss-stained, tired grandeur of its cities.
For the car enthusiast, it lives too on ’s cobbled streets and patched-concrete highways. As much as geography has designated the crossroads of the , political and economic forces have set it at the confluence of automotive history.
Yes, there are many places in the world with a variety of vehicular ages and styles. But none can claim ’s signature mix of pre-embargo American chrome and fins and post-embargo Soviet angularity, leavened with scatterings of Chinese micro cars, decommissioned Dutch buses and other unlikely conveyances.
Seeing all this in motion – the flat-top Cadillac Sedan De Villes and swept-wing Dodge Custom Royal Lancers, the Ladas, and Land Rovers – can be startling, even unsettling. Has some time-transfer machine gone awry? Eventually this overlay of eras will seem less unworldly – but never, to the car buff, less fascinating.
Go to if you can, but if you cannot, visit instead via the pages of this site as we celebrate the island’s unique automotive landscape. Send in your comments and your photos, explore and enjoy. And if you know whether the Buick, above (Jibacoa, 2007) is a Roadmaster, Century, or even a Special, please tell .
He’s been waiting a long time to find out.